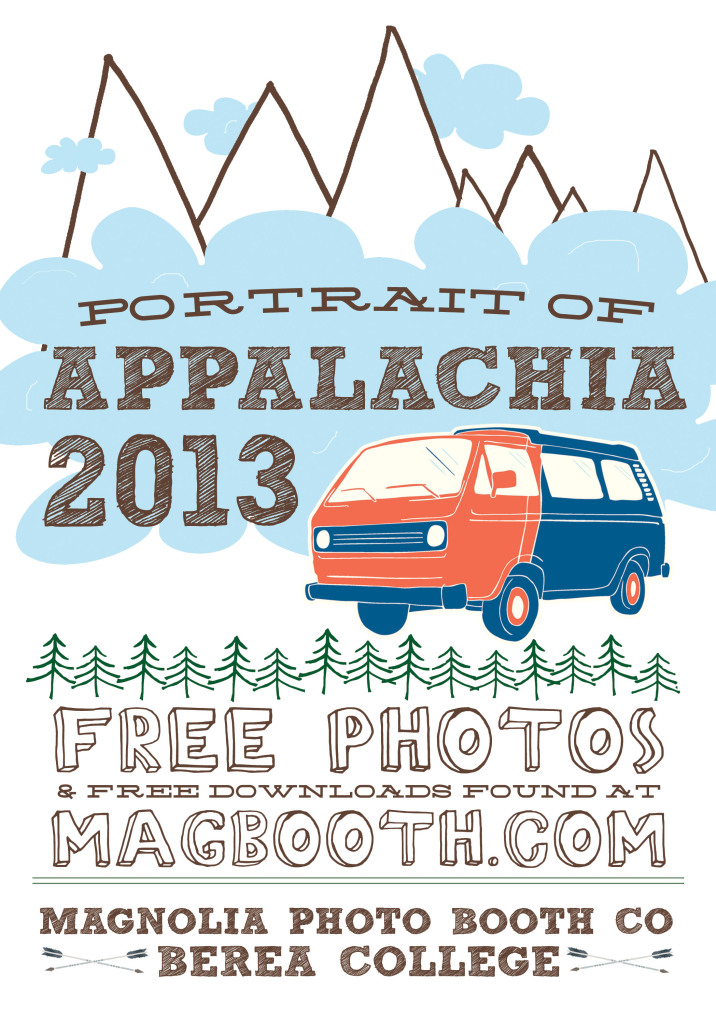 The Idea:
In 2011 Magnolia Photobooth Company converted a bio-diesel self-sustaining Volkswagen Westfalia with a built-in photo booth and wifi capabilities to upload pics and daily logs in real time, and sent it across America taking portraits of half the states on the continental US. The project was such a hit that the ensuing photographs have now been printed in a collectable book. Magnolia Photobooth Co. wants to continue capturing the life and times of Americans by spending concentrated time in particular areas. I met with Co-Owners Daniel Sanders and Peter Tower in early 2013 about the possibility of continuing the project but concentrated in the Southern Appalachian Mountains.  The idea I had was that the majority of photo projects centered in the Appalachians pushed a stereotype of dilapidated houses, yard cars, stripped landscapes, and walls filled with gun racks. With a portable studio we could forgo the temptation of searching for habitats that paint a narrative and photograph everyone in a professional studio style with a uniform background.
While designing our project we contacted world renowned Photographer Ted Wathen for a meeting to discuss our ideas. Ted Wathen famously headed a two year photographic exhibition  throughout Kentucky through 1975-1977 in a project titled “Rough Road” funded by The National Endowment for the Arts and the Kentucky Arts Council. The Photographers in the project were Ted Wathen, Bob Hower, and Bill Burke.
We met Wathen at his studio in New Albany, Indiana that he shares with Bob Hower, for an exciting day of viewing selections of Rough Road, discussing the obstacles he faced, and our idea of removing the landscape. Honestly, some of the most well known and stereotypical photographs from Appalachia are from his series --photographs of bare foot girls standing in dirt roads, and children wielding shotguns --so we didn’t know what he would think. To our amazement he said, “I think this is a brilliant idea, even bigger than you know!” Wathen told us of how he had to search out scenes in Eastern Kentucky  that showed prosperity in order to try and keep a balance, and to find scenes that didn’t play into a stereotype, and taking the environment out would put a focus on the people not just a scenario. We showed Wathen our “Studio Van” (see photo below), how it was outfitted to live in, and how collapsing and/or unfolding certain compartments made it a portrait studio. 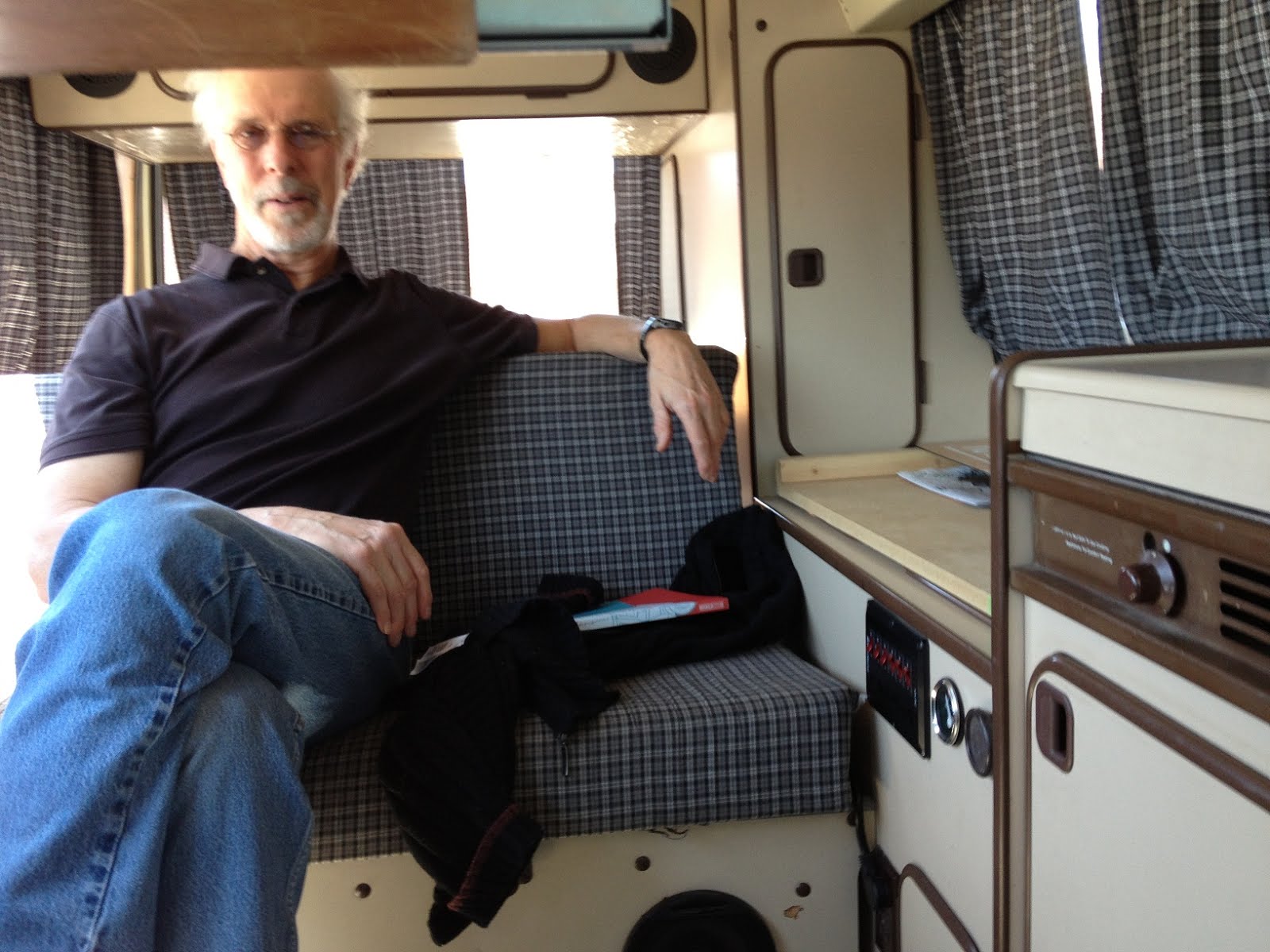 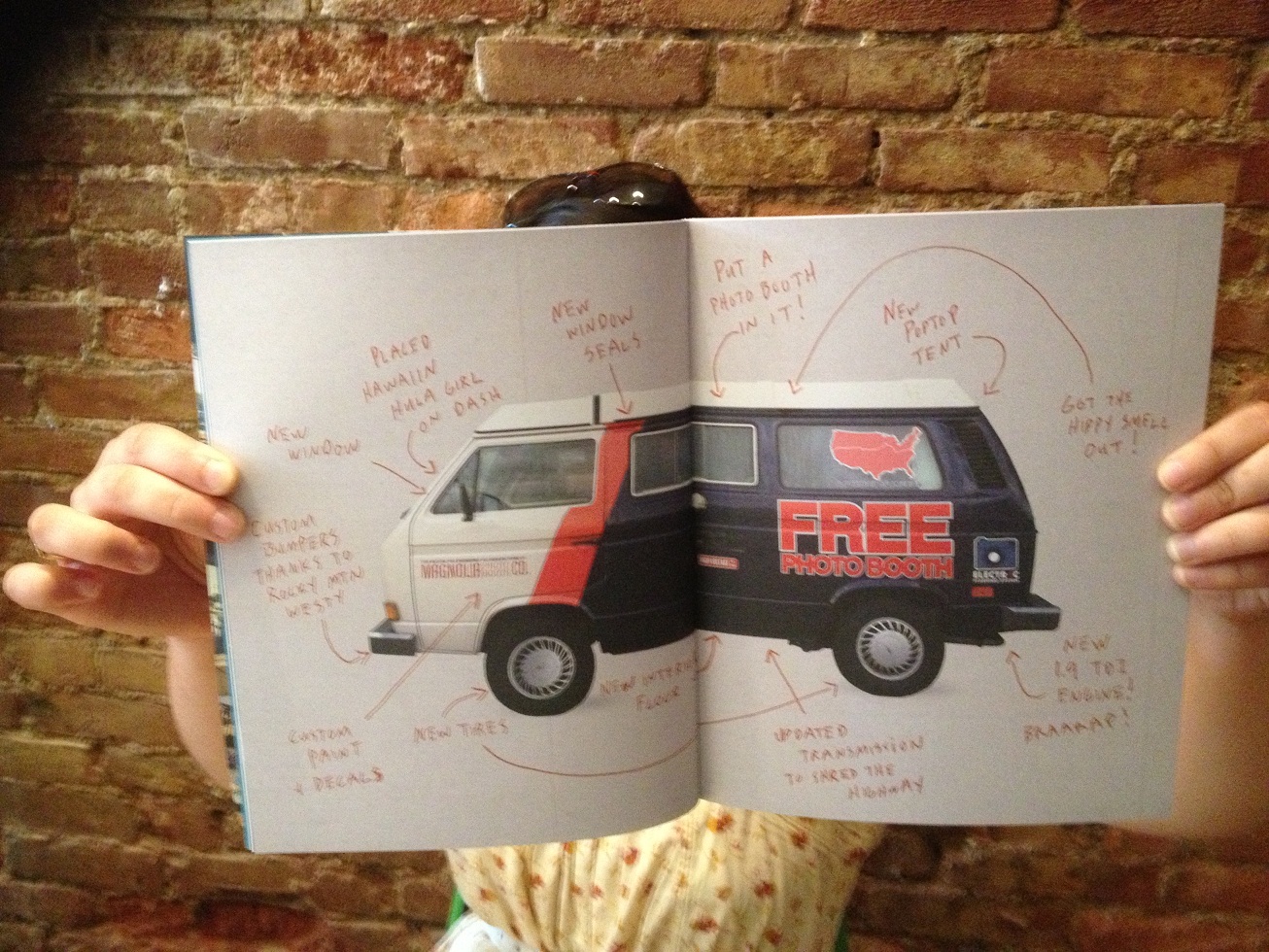 Maggie is a 1978 Volkswagen Westfalia. Westfalias are diesel engines passenger vans that seat 4 with a built kitchenette complete with refrigerator and stove. The back seats fold down into a bed for two and the roof pops up holding a tent and a second bed for two, sleeping four comfortably (honestly, and I was skeptical). The Magbooth team outfitted the van with a 1992 Passat engine, new transmission, as well as a custom paint job. As for the photobooth portion of the van, a glass windowed compartment was installed in the ceiling holding a Nikon dslr (digital single lens reflex) camera pointing to the back bench seat. An Ipad was also installed on the box prompting visitors where to sit, how many pictures would be taken, that 2 free copies would be printed immediately and to press the screen when ready. For our project we also installed a program asking visitors if they had read our release and  asked for an email address as a digital signature. The Ipad would count down from 5 and take 3 photos prompted by a flash bulb in the box. After the three photos are taken, a program --designed by founder Daniel Sanders and updated by Forest Giant filters the photos --places them in a strip format (file size about 40 KB), adds a ‘Portrait of Appalachia’ banner (with both Magnolia Photobooth and Berea College logos) at the bottom, prints copies on a Dye supplementation printer in the back of the van and pops them out of slot under the back window. The original photographs are saved on a hard drive (at about 3-7 MB/ 300 PPI each) and can either be sent by hot spot or jetpack via Maggie’s hard drive to the Magbooth HQ or uploaded once the van returns. Once the Headquarters receive the files, a web page is made available for the participants to view and download copies of their pictures.
In Action:
As part of our training we took the van, Maggie, and her equipment to 2 events in Louisville to get a feel for how everything worked, and most importantly how to work the crowds. The two events were “The Mayor’s Ride Your Bike to Work Day” event downtown and “Louisville Loves Mountains” a Kentuckians for the Commonwealth event.
Working these events in Louisville meant two things: Louisvillians are familiar with Magbooth and have no reservations about stepping into a van that says “FREE PHOTOS” on the side, and, because of this we had non stop crowds all day waiting for a photo. We took hundreds of portraits, and quickly became proficient on identifying and handling issues, such as when the generator fails, the printer quits, or the Ipad freezes. We also learned that networking was a great way to plan our big trip. Louisville Loves Mountains Fest was filled with people who worked throughout Eastern Kentucky and we received lots of leads and numbers of places to visit and where to find crowds. 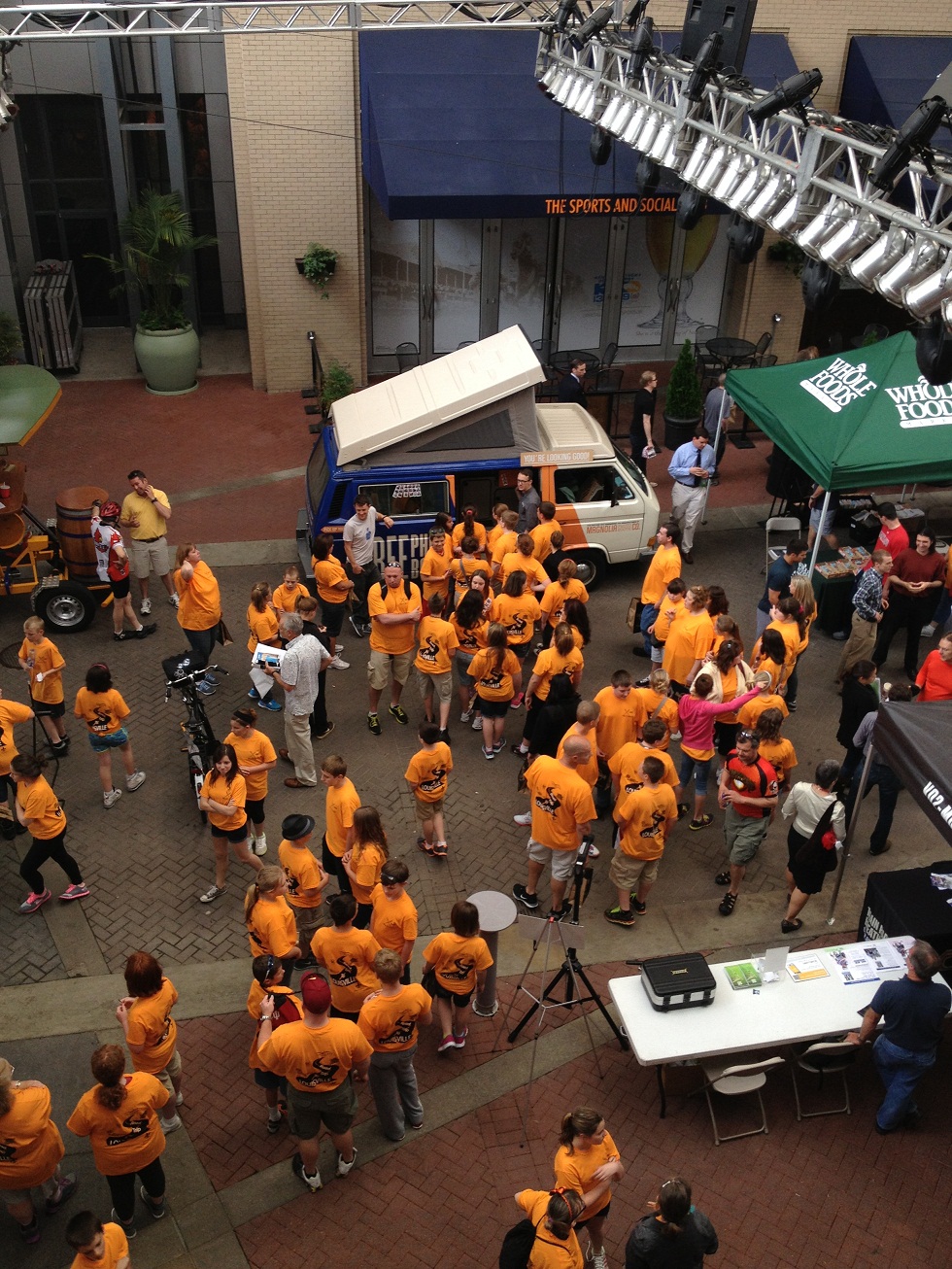 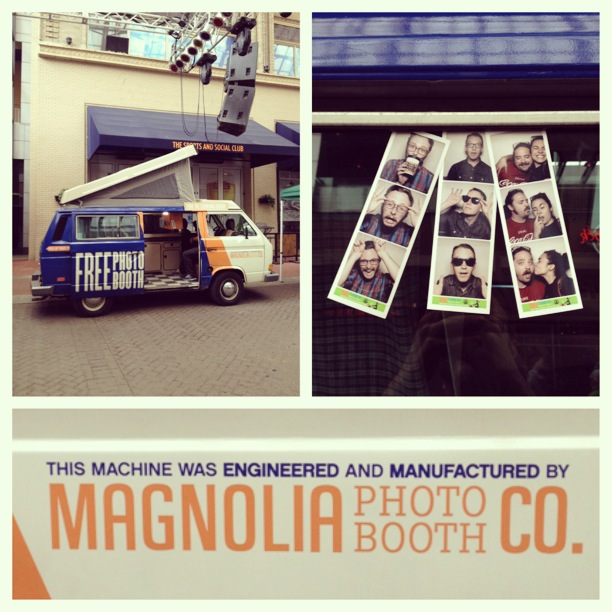 
A large amount of the travel aspect of the Internship was planning out when and where we traveled. The deal we had with Magbooth was that we could use Maggie when the equipment wasn’t needed elsewhere. For this we decided instead of heading out on 6 or so weekend trips, when we got the green light we would optimize our time by heading out on 4 or 5  trips of 4 or 5 days. We determined that we wanted to go to the 5 main Southern Appalachian States: Virginia, West Virginia, the eastern sides of both Kentucky and Tennessee, and North Carolina. We hoped to accomplish it in 4 or 5 trips. We also wanted to try and take advantage of events in each state, in order to find gatherings of people. We made long lists of possible events we could contact in order to get permission to set up the studio. If we had to postpone a trip due to availability, we contacted State/National Parks to see if we could set up there. Often times we had to drop events and add others at the last minute. One noticeable benefit when we explained our project was that many of these places (most dealt with in some way in preserving Appalachian culture) had heard of Berea College or employed Berea Graduates. In fact every place we contacted welcomed us to come and set up, even when it was not normally allowed to have outside researchers, and in one case, to have any outsiders at all.  Another Berea advantage we had was the dispersal of Berea students across Appalachia during the summer break. We tried to plan trips to areas where Berea students could help us with contacts, show us viable places to set up and in some cases also volunteer to help run the studio. In some of the more rural places it was extremely helpful to have someone from the area to help open doors.